Last year I bought an old shop sign on an antique market in France. After we were back in our store we carefully cleaned the sign so it could be photographed for our website.
The sign says: “Le Tambourin”.

I Googled it to see if I could find out where this sign belonged to so I could make a nice description for this product on our website.

If you type in “Le Tambourin” in Google you will get overrun with “Vincent van Gogh, Paris”. So the research of maybe my best purchase, in any way my greatest story, started.

My research in short

Le Tambourin was a cafe in Paris, Run by the Italian lady Agostina Segatori. It was first located on Rue Richelieu 27 in Paris and later moved to Boulevard de Clichy 62 in Paris in the year 1885. Many artist Visited Le Tambourin. Big painters as Jules Chéret, Edward Dantan, Paul Gauguin, Emile Bernard and Also Vincent van Gogh.

On February 28th 1886 Vincent wrote a letter to his brother Theo van Gogh, who lived in Paris, about his arrival in Paris.    Theo was manager at the art gallery “Boussod, Valadon & Cie”.
Vincent moved in with his brother Theo at a small apartment on Rue Lepic. Later on, Theo and Vincent moved to Rue Laval around the corner at Le Tambourin. Vincent took lessons and frequently visited Museums to learn. That is where he met Emile Bernard, another great painter. They talked about selling their paintings and Emile took Vincent to Le Tambourin.

Le Tambourin was a Cafe where many artist could exhibit their work. Vincent who could not sell his paintings in that time made an agreement with the owner of Le Tambourin, Italian Lady Agostina. Vincent would give her paintings and she gave him meals and drinks in return. Later on they got in an affair.

If Vincent had an affair with Agostina, Agostina may have asked him to paint a new sign for her new Cafe location.

I took another look at the writing and find that “Le” was written elegant and italic where as the T of Tambourin is very tense and tight. Also the way the “N” is finished seemed strange and not in line with “Le”.

The sign should be made in 1885 – 1887 because that is when they moved the location of Le Tambourin. I have compared the handwriting of the sign with the handwriting of Vincent van Gogh letter written on February 28 1886. What immediately stood out was the “T” from Vincent his Signature.

I have checked all the letters for more comparisons and copy pasted the red letters from the letter to create “le tambourin” and it looked very similar.

On the Internet, I found an affiche of this cafe from that time and there are several round panels on the cafe front.

I also found a letter from Vincent on vangoghletters.org where he wrote to his brother that he is no longer doing work for Le Tambourin. Since Vincent was not the type of person who did the dishes, I like to think that making the sign was work Vincent did for Le Tambourin.

This must be the sign from that Café, it must be made by Vincent van Gogh.

The Van Gogh museum, Amsterdam told me twice that based on stylistic characteristics, they do not share the opinion that the sign was made by Vincent van Gogh.

Unfortunately, they do not want to share details on their opinion or research…

As for now
I still do believed that this must be made by Vincent and I am now trying to find out if my sign is one of the round signs on the affiche. I am trying to find pictures of this establishment in the years 1885 – 1887 to see if my sign hung on this particular Facade.

If I cannot find these pictures, I will try to find out how many establishments existed between 1875 – 1900 with the name “Le Tambourin” in France.

This sign, and the research of it, will probably keep me busy for some more time. 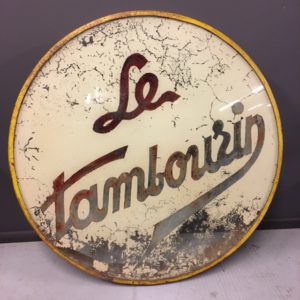 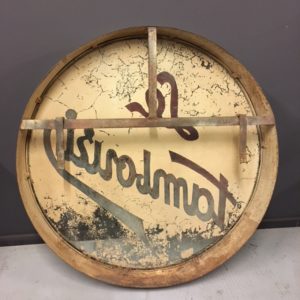 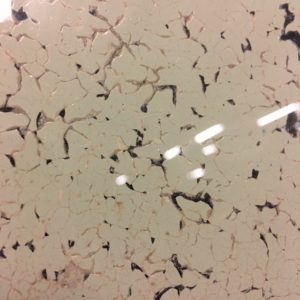 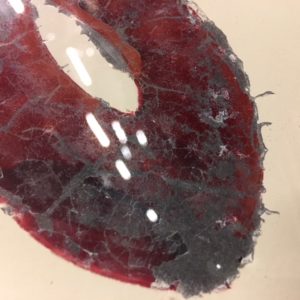 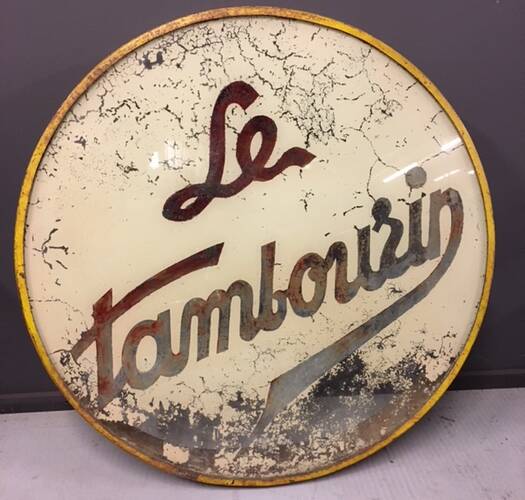